This sermon was preached at the Episcopal Church of the Nativity in San Rafael CA on August 16, 2015.

Last month, after presenting a paper at an academic conference in St. Louis, I took a mini-retreat to a Trappist monastery in Kentucky. It’s called the Abbey of Our Lady of Gethsemani and, for several decades, it was home to perhaps the most popular and influential spiritual author of the 20th century, Thomas Merton. He was a prophet, poet, mystic and advocate for social justice and interfaith dialogue; and among his many nuggets of wisdom, he wrote that the perfect response and fulfillment of the baptismal vocation (to which we are all called through our baptism) is martyrdom.[1] Although Merton was not a martyr himself, his monastery boasts a beautiful garden of life-sized statues called the Garden of Gethsemani, which commemorates a young martyr who died fifty years ago today (almost exactly) and who happened to be an Episcopalian. His name was Jonathan Myrick Daniels and he was a second-year seminarian at the Episcopal Divinity School in Cambridge MA when he decided to travel down to Alabama to become more actively involved in the Civil Rights movement, inspired by Martin Luther King Jr.’s invitation to clergy. While working for voting rights, Daniels befriended several black families with whom he lived and got to know the inside of a prison cell quite well after being arrested for his efforts. On one occasion, after being released from prison in Hayneville AL, Jonathan Daniels and his friends (a Catholic priest and two African-American girls, Joyce Bailey and Ruby Sales) walked towards Varner’s Cash Store to purchase a refreshing soda after several days in a hot Alabama jail cell. On the steps of the store, they were confronted by a part-time deputy sheriff named Tom Coleman, who yelled obscenities at them; and then aimed a shotgun at seventeen-year-old Ruby Sales; and then pulled the trigger. Daniels pushed Ruby Sales out of the line of fire and took the shotgun bullet, which killed him instantly. He was 26 years old. Coleman was later acquitted on a plea of self-defense by an all-white jury and Jonathan Daniels has been rightly recognized as a hero and martyr in the Episcopal Church’s Calendar of Saints, which honors him on August 14th, the day he was arrested. (He was killed, however, on August 20th which is the feast day of St. Bernard of Clairvaux, the saint who inspired the creation of the Trappist Order.[2]) Martin Luther King Jr said, “One of the most heroic Christian deeds of which I have heard in my entire ministry was performed by Jonathan Daniels.” (He would have been 76 years old today.)

The encounter between Daniels and Coleman challenges me to consider what I would do in that situation. Would I run away in fear? Would I let my friend get shot? Would I attack Coleman? And if I would attack Coleman, I also have to ask, would I or could I be Coleman in that situation, wielding the shotgun in fear; afraid of people who are changing the way things have been for years and wanting to get rid of them, even violently? Or would I offer my life to my friend in a profound act of self-giving love, in the way that Daniels did?

Thomas Coleman was driven by a fear that turned him violent while Jonathan Daniels was inspired by a faith that empowered him to be courageous and heroic. Before his arrest and death, Daniels said, “I lost fear in the black belt [the name of the region in Alabama where racist whites continued to discriminate and marginalize blacks] when I began to know in my bones and sinews that I have truly been baptized into the Lord’s death and resurrection, that in the only sense that really matters I am already dead, and my life is hid with Christ in God.”[3] Daniels understood baptism as a kind of death that brings about new divine life. He understood the sacraments as a source of courage, self-giving love and life-giving wisdom.

The Scripture readings this morning all revolve around life-giving wisdom. Paul says, “Be careful then how you live, not as unwise people but as wise” (Eph 5:15). The Psalmist offers wisdom in the form of teachings, saying, “Come, children, and listen to me; I will teach you…Who among you loves life and desires long life?” And in Proverbs, Wisdom is personified as a woman who invites everyone to eat of her bread and drink of her wine so that they can “lay aside immaturity, and live, and walk in the way of insight” (9:6). The Deuterocanonical text (of the 2nd century BCE) called the Book of Ecclesiasticus develops this image of Lady Wisdom and describes her as one who nourishes her guests with the “bread of understanding” and refreshes them with “the liquid of wisdom” (Ben Sira 15:3). All of these images culminate in the Bread of Life discourse in John’s Gospel where Jesus offers himself—his very flesh and blood—as the bread of understanding and the liquid of wisdom.

But what does the Bread of Wisdom have to do with the martyrdom of Jonathan Daniels? Last week, I offered some background information about the lechem panim, the Jewish “Showbread” or “the Bread of the Presence.” These twelve loaves of bread represented the presence of God and were brought to the front of the temple three times a year by the Jewish priests, who held them up and said, “Behold, God’s love for you.” What I did not mention last week was that the priests would then consume this bread, which was understood to nourish them spiritually, to impart wisdom and to strengthen them to carry out their priestly ministry. And what was their priestly ministry? According to a scholar of Jewish temple theology Margaret Barker, the most important part of the Jewish priest’s ministry was to embody the self-giving love of God. The complex sacrificial system of the Jewish temple was not about sacrificing animals in order to appease a bloodthirsty deity. Instead, the blood of the sacrificed animals represented the blood of the high priests who poured out their life for God’s people. And the blood of the high priests represented the blood of God who pours out his life for his people, every day.[4]

Baptism initiates us into this priesthood while the Eucharist nurtures and empowers us to continue and grow in our priestly ministry. Obviously, ordained clergy like Kirsten, Rebecca and myself fulfill specific and important liturgical and administrative roles as priests and deacons, but Jesus was about empowering all of his followers to be the self-giving high priests. Jonathan Myrick Daniels understood this in “his bones and sinews.” He understood that the sacraments of Baptism and Eucharist empowered him with the high priestly wisdom of self-giving love. 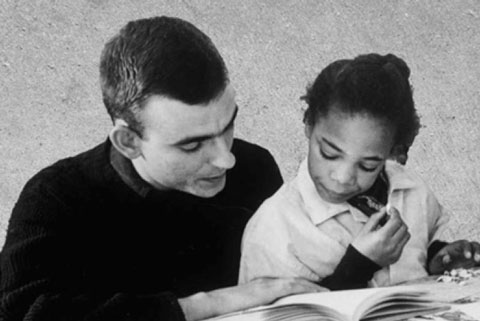 The bread that we will break and eat together today is that same Bread of the Presence as well as the bread of wisdom, the bread of understanding. It is bread that causes us to know (in the biblical sense of knowing) and to understand (not just intellectually but in our bones and sinews) God’s self-giving love and life poured out and broken for us. That is the high priestly wisdom. By receiving this spiritual food into our bodies we become strengthened, nourished, empowered and transformed to be God’s high priests in the world, that is, embodiments of God’s self-giving love; or as Paul says in Romans, “living sacrifices” (Rom 12:1). And that self-giving high priesthood will likely look different for each of us. For some of us, it might look like risking our own safety in order to protect the safety of others. It might mean getting our bodies involved with the ‘Black Lives Matter’ movement or with serving the poor at the Marin Interfaith Street Chaplaincy or helping out with relief work in Bosnia after a devastating flood. For most of us, our high priestly ministry will not result in martyrdom as it did for Jonathan Daniels, but, by feeding regularly on the bread of life-giving wisdom, we become more like the heroic seminarian and less like the cowardly deputy sheriff so that if we do find ourselves in such a critical situation, we might act less out of violent fear and more out of self-giving love. By feeding on the bread of wisdom, we allow God’s life and love to transform us so that we might be willing to perfectly fulfill our baptismal vocation, even to the point of martyrdom.

The Bread of Life discourse has given us the opportunity to peel away and peer at all the rich layers of theological meaning associated with the Mystery of the Eucharist. The sacrament which we will experience this morning calls us to share whatever we have, to work towards the healing and feeding of the whole world, to draw near to the One who hears and responds generously to our kvetching and also, to be like Jonathan Myrick Daniels, like the self-giving high priests who embody God’s love in the world through the nourishing, transforming and enlightening power of the lechem shol chochmah, the bread of wisdom. And this is only scratching the surface of what we do and what God does to us when we celebrate the Eucharist.

On my last night at the monastery in Kentucky, we all knelt in silent awe and adoration before the Bread of Wisdom, as it was displayed in a monstrance, beholding God’s love for us, like the Jews at the temple. Thomas Merton said, “The deepest level of communication is not communication but communion. It is wordless…beyond speech…beyond concept.” All of these words and interpretations are helpful but ultimately they can only point to the Mystery of God’s presence among us in the bread and wine made holy, which is changing us and uniting us to God and one another in ways that we cannot even begin to understand. In the end, the bread of understanding reveals the limits of our own understanding and moves us to a place of profound unity, silence and awe, where we are, in the words of Jonathan Daniels, held together with “the invisible communion of saints” by our God in whom “we are indelibly [and] unspeakably One.”[5] Amen.

[2] St. Bernard of Clairvaux, considered the last of the Church Fathers, was a leading advocate and reformer of the Benedictine monasteries in the twelfth century, founding sixty new Cistercian abbeys. The reformed Benedictines were called Cistercians, deriving their name Bernard’s monastery in the village of Cîteaux. In the 17th century, the Cistercians developed a more strict order called the Order of the Cistercians of the Strict Observance (OSCO), otherwise known as the Trappists, named after La Trappe Abbey in France.