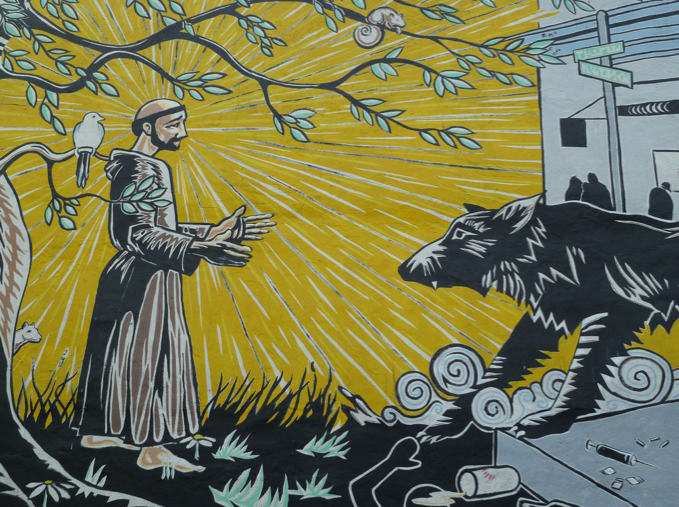 Readings for the Feast Day of St. Francis

This sermon was preached at St. Francis Episcopal Church in Novato CA on Sunday October 7, 2012.

“I thank you, Father, Lord of heaven and earth, because you have hidden these things form the wise and the intelligent and have revealed them to infants.”

There was a discussion in a First Grade religion class focused on St. Francis of Assisi. After school, a First Grader came home very excited about what he had learned and blurted out to his mother, “Guess what, Mommy? Today, I learned that St. Francis was a sissy!” Now one practical way to ensure that we don’t go home thinking that St. Francis was a sissy is to practice the proper pronunciation of the saint’s hometown: Not “Asisy” but “Aseesee.”

However, even with the proper pronunciation of his hometown, I wonder if many of us still do think of this saint as perhaps a little too kind and too gentle for his own good. He was known to have cried every day, he preached sermons to birds, he rubbed sticks together as if he were playing the violin, he called the sun his brother and the moon his sister, and he sang so many French songs that some people think that that is why he was called “Francis.” And today, most of us know him as “the birdbath saint.”

When I first became an Episcopalian, I actually thought that it was a requirement for all Episcopal churches to have a birdbath statue of St. Francis. My sponsoring parish in Los Angeles used to boast about their most famous former parishioner, General George Patton. Perhaps the most successful field commander of any U.S. war, Patton, who earned the nickname “Old Blood and Guts” for his outspoken ruthlessness, was definitely the antithesis of a sissy. The funny thing is that the church displayed a life-size statue of Patton in the courtyard, only yards away from their birdbath statue of St. Francis, thus creating a challenging and ironic juxtaposition: the gentle birdbath saint and “Old Blood and Guts.” Honestly, St. Francis looked kind of like a sissy next to this huge Army General who epitomizes American military machismo.

Now I could argue that St. Francis was not a sissy by describing: his own participation in war during his youth, his bold resistance to violence and consumerism as a young adult, his radical embrace of poverty and his courage in crossing enemy lines weaponless during the Fifth Crusade to speak with the sultan of Egypt about peace (something Patton would, of course, never do). However, because St. Francis was such a radical in his tendency to challenge the cultural mores of his time, I am sure he would rather challenge the categories of sissy-ness and manliness than argue against being a sissy. He would probably turn those categories on their head and even embrace the lowly role. He had no interest in fitting into any cultural categories. And he had no interest in proving his manliness by employing weapons of warfare. However, this saint wielded one particular weapon, which gave him the power to heal sicknesses, to cure lepers, and to tame wild animals.

This weapon, or this quality, of St. Francis is something that all of us have the potential to develop within ourselves. This quality finds powerful bodily expression in St. Francis in what is known as the stigmata, the wounds of Christ’s hands and feet and side appearing as real wounds on the hands and feet and side of St. Francis. The stigmata originates from the words of Paul in Galatians 6 which we just read, “I carry the marks of Jesus branded on my body.” Earlier in this same chapter, Paul encourages his readers to “carry each other’s burdens.” The quality that Paul is talking about, the quality that is expressed bodily in the stigmata of St. Francis, the quality that made St. Francis able to commune with all of creation, and made St. Francis more powerful than Patton, the quality is empathy. Empathy is the capacity to share in the suffering (the pathos) of another sentient being; in other words, the capacity to share in the suffering of anyone or anything that has the capacity to suffer. Franciscan priest and author Richard Rohr says that empathy is “the integral part of Franciscan spirituality.”[1] 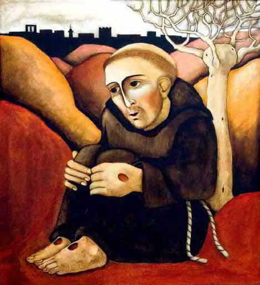 If we can see beyond the medieval obsession with blood, we can see that the stigmata was a powerful expression of St. Francis’ empathy for Christ and for all who suffer. Francis was able to share in the sufferings of the poor and the lepers, but he didn’t stop with humans. He shared the sufferings of animals and they responded to him, they listened to him. When a ferocious wolf was terrorizing the city of Gubbio, St. Francis saw beyond the wolf’s violence and into its hurt and hunger and neglect. The wolf felt the saint’s empathy so deeply that it became as gentle as a lamb in his presence and even made a pact with its paw to never terrorize Gubbio again. The empathy of St. Francis even extended to the sun, the moon, the stars, the wind, the water and all of creation, which were all brothers and sisters to him. When people were around him and his empathy, they felt like their burdens had been eased and lifted and their yokes had grown less heavy because they knew (they felt deeply) that someone was sharing the load with them. They found rest for their world-weary souls in a similar way that the followers of Jesus found rest in his empathetic presence.

The beauty of this quality is that we do not have to be especially intelligent or wise or wealthy to cultivate it. In fact, according to the Gospel, this quality often eludes the wealthy and the wise. “I thank you, Father, Lord of heaven and earth, because you have hidden these things form the wise and the intelligent and have revealed them to infants.” The Greek word for “infants” is nepios, which can also be translated as someone who does not speak or someone who needs training. (sounds kind of like our pets). Empathy is a quality available to all and is often found among those from whom we don’t expect it. Empathy is available not only to humans, but to all sentient beings (Francis might even say to all of creation). Personally, one of my most profound experiences of empathy was not from a human. Not too long ago, my cat, Frisky London, passed away at the ripe old age of 20 (which would be equivalent to about 96 in human years). Before she passed away, she comforted me. The last time I said goodbye to her at my parent’s house, I cried, knowing that I might not see ever her again. She was not really eating or drinking and was very unresponsive. But when I cried, I cried into her beautiful fur coat. And as I was oozing out my sadness onto her, she responded by licking my tears. And, I felt, very powerfully, that she knew she was going to die and she knew that I was going to miss her and she showed me empathy and she comforted me and she eased my sadness. Frisky was my St. Francis.

Empathy has the power to heal, to connect, and to lighten our load. It is this quality that I seek to cultivate among the youth of the Marin Episcopal Youth Group. By sharing our joys and challenges in a safe and sacred space each week, I hope we can become a community marked by empathy, and not just empathy for one another but also empathy for those outside the community, and for all of creation.

St. Francis was a master of empathy and because of that, he is considered the most beloved saint in all of Church history. And Francis was a master because he studied under the greatest Teacher of empathy, the Rabbi who invites us to share our burdens with him and who promises rest in the midst of suffering. The same Rabbi who we believe to be God incarnated as a human in order to empathize with us.

So as we pray for another, let us practice empathy for each other and for all of creation. And as we bless our animals today, let us rejoice in the love that God reveals through them. And let us thank God for St. Francis of Assisi whose tremendous empathy alleviates suffering for all of creation even today and makes General George Patton look kind of like a sissy.

3 thoughts on “The Empathy of a Sissy”