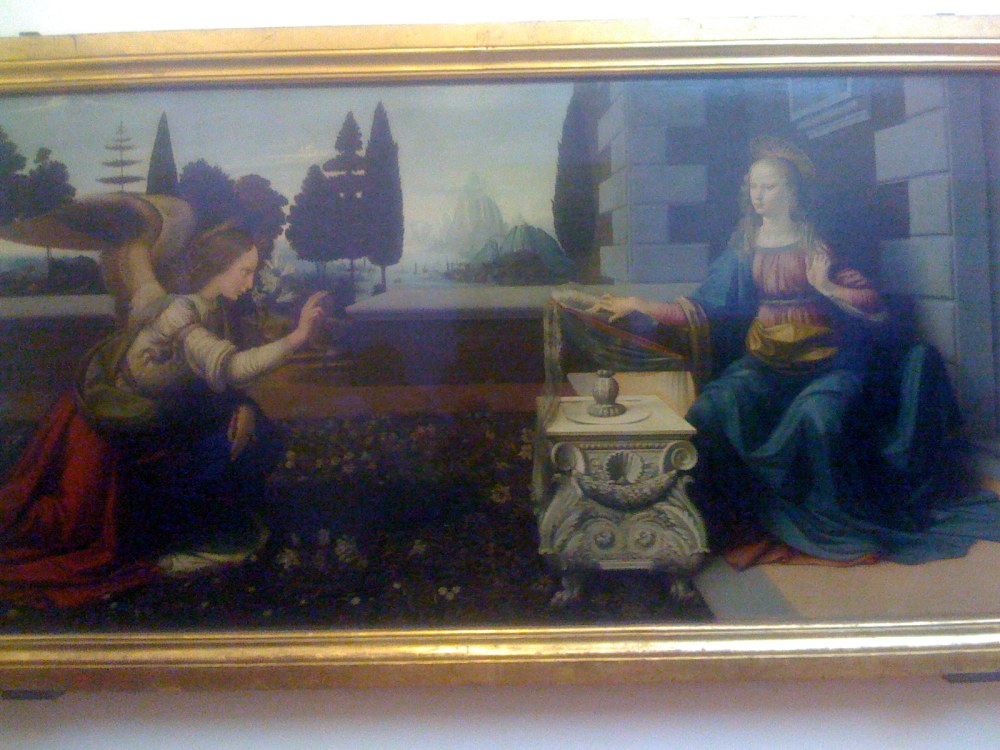 Nine months before Christmas Day, the Church celebrates the Annunciation of Our Lord Jesus Christ to the Blessed Virgin Mary or Lady Day (as the Church of England likes to call it) or the AOLJC to the BVM (as I like to abbreviate it). This day commemorates the angel Gabriel’s announcement to Mary that she will conceive and give birth to the Son of God.

I became abundantly aware of this day in the gift shop at the Uffizi Gallery in Florence, Italy. I had just spent a couple hours meandering through halls of famous Renaissance paintings by Michelangelo, Rafael, Botticelli, and Da Vinci. Perhaps the most famous painting at the Uffizi is Botticelli’s Birth of Venus which boasts a sexy goddess of love emerging naked from the sea and being blown by the zephyrs of spiritual passion into the warm cloak of Horae, the goddess of the seasons. I actually found this depiction of pagan gods surprisingly refreshing among the thousands of Roman Catholic paintings that were overwhelming my aesthetic intake. My brief tour of the Italian churches and museums frankly made me sick of looking at Madonna and Child. I am grateful this painting of Venus was not thrown into the bonfire that destroyed so many other masterpieces that the Church considered too immoral at the time. These pagan depictions kept my experience at the Uffizi from being an endless tour ad nauseum of baby Jesus at Mary’s breasts.

However, as I was glancing through a book at the gift shop, I felt compelled to return to one more painting of the Blessed Virgin. I was flipping through a book that honored a saint for each day of the year. Each day offered a brief description along with a famous painting of the saint. So I decided to look at today’s saint. But it was not a saint at all. It was the Annunciation of Our Lord Jesus Christ to the Blessed Virgin Mary and the painting it included was Leonardo Da Vinci’s famous depiction, which happens to be located at the Uffizi Gallery in Florence.

I did not recall seeing that painting or at least spending much time with it due to my Madonna overload. So I felt it I should return and see it one more time because it is after all Annunciation Day. And according to this book, Da Vinci’s portrayal is perhaps the most famous.

So with my friend’s help, I trekked my way through the maze of paintings and found Da Vinci’s Annunciation. And then I fell in love. I gazed at the dark green grass until I could feel its coolness in between my toes. I marveled at Gabriel’s wings until I could hear their forceful flutter. And I even peered at the Blessed Virgin who somehow did not bore me this time. I wanted to sit with her and pray and read with her. And I could almost smell her sweet perfume, which she must have delicately applied with the same softness I saw in her hands.

Gabriel kneels his right leg and rests his elbow on the thigh of his right bent leg. His right hand bears a flowering lily now known as the Annunciation Lily, because it is so often used in paintings of this event. And he looks at the startled Madonna (who still manages to remain soft and gentle) with the most intent and serious eyes. What he is about to tell her is of utmost importance. He seems to be aware that she might doubt it. His eyes say, “You need to hear this and accept this. Do not deny this or brush this aside. This is extremely important.”

And what does Gabriel say to her? According to Luke, he says, “Rejoice, you highly favored one! The Lord is with you.” The text then reads, “But when she saw him, she was greatly troubled at the saying, and considered what kind of greeting this might be” (Luke 1:29). I like to think that she pondered what kind of greeting this might be because she had not yet become Episcopalian. As Episcopalians, we know that Mary should have said, “And also with you.” But Gabriel understood that Mary had not yet learned this Episcopal greeting and so calmed her fears by saying, “Do not be afraid, Mary, for you have found favor with God.”

He then continued, “Behold, you will conceive in your womb, and bring forth a son, and will call his name ‘Jesus.’ He will be great, and will be called the Son of the Most High. The Lord God will give him the throne of his father David, and he will reign over the house of Jacob forever. There will be no end to his kingdom.”

After taking some pics of Da Vinci’s Annunciation on my iPhone (that, like all copies of masterpieces, failed to convey the power and beauty of the original), I continued to reflect on the Annunciation event as I wandered outside the Uffizi into the wet streets of Florence.

What does the Annunciation mean to me, a 26-year-old backpacking through Europe? I first started thinking about the Virgin Birth. Do I really believe it? I say that I do every time I recite the Nicene Creed. It seems to be fairly crucial in understanding Christ’s Divinity. But really? A virgin birth? I’m really not sure.

We also visited Chartres Cathedral, which pulled me further down the virgin birth rabbit hole. Apparently, the site of Chartres Cathedral used to be a holy meeting place where the ancient Druids worshiped and awaited the arrival of the Virgo Paritura: a virgin who will bear a child. According to Legend, the early Christians arrived at Chartres and shared with the Druids the story of Jesus, who was born of the Virgin Mary. Recognizing that Christ and Mary fulfilled their prophecy, the Druids of Chartres were all baptized.

This story did not offer me any rational reason to believe in a virgin birth, but it excited my spirit. How mystical and magical and mysterious! I know Druids and Christians are not the only faith traditions with Virgin Birth legends. Hindus, Zoroastrians, Greeks and others had their stories too. There is something about the Virgin Birth that speaks to our souls, awakens our spirituality and opens us up to the transcendent Wholly Other. I want to believe in the Virgin Birth. And that desire for openness to the divine honestly outweighs my intellectual need to rationally comprehend the science of a virgin birth.
But what did Matthew and Luke mean when they spoke of a Virgin Birth? Were they really talking about a young woman, who had not had sex, giving birth to a child? Scientifically, this is impossible.

In the Renaissance paintings of the Annunciation, Mary is always engaged in prayerful reading of Scripture when Gabriel arrives. As Mary seeks after God, she receives this message from Heaven: “God is with you. Furthermore, God is within you. And God is doing something inside of you right now. You might not feel it right now. In fact, you might feel empty and miserable and confused right now, but I want you to know that God is at work within you. And you will give birth to something beautiful, something that will change the world eternally for the better.”

As I pondered the Annunciation, I received the same message from Heaven. And the message came with the same intensity that I saw in Gabriel’s eyes in Da Vinci’s painting. And I believe the same message comes to those who seek God in prayer and the reading of Scripture.

And the message is for us today. Let us hear it and receive it with the same openness with which Mary received that profoundly important message from Gabriel on Annunciation Day: “God is with you. Furthermore, God is within you. And God is doing something inside of you right now. You might not feel it right now. In fact, you might feel empty and miserable and confused right now, but I want you to know that God is at work within you. And you will give birth to something beautiful, something that will change the world for the better and for eternity.”

May our response be: “Behold, I am the servant of the Lord. Let it be to me according to your will.”